Do you know Charlotte? 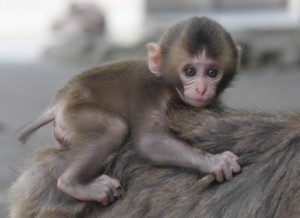 She was born last May in Takasakiyama Monkey Park in Oita and her name was selected by public poll. Then her name was determined as Charlotte named after new princess name in UK.

This was very big issue in Japan. People said “It is too impolite to name a monkey from UK princess” “We should change name!” etc. At last Japanese embassy asked British Royal Family if this park can use Charlotte on a monkey. British Royal Family’s answer was great. They say it is up to zoo and no one felt hurt by using Charlotte.

Now she is very popular monkey in this monkey park.

Popularity was conducted in this park every year. The result was announced this week.

Charlotte was selected the best female monkey in all female monkeys in this park. According to staff here, Charlotte is naughty girl and she often approach man and untie shoelace.

Takasakiyama Monkey Park is in Oita city(my hometown!), actually it locates between Oita city and Beppu city. There are more than 1,500 monkeys in this monkey park. One of the famous place for tourist.

Monkeys create three groups and each group is led by strong leader. Monkey society is similar with human’s society.

You can see how they live in this big mountain and appraoch monkeys.

This year is monkey year in Japan. Maybe other country has same culture as Japan.

This culture comes from China.

In ancient China, people used 12 animal symbols to indicate years and so on. This system was introduced to Japan in 5th century. The 12 animals are the rat, ox, tiger, hare, dragon, serpent, horse, sheep, monkey, rooster, dog and boar. 12-years are one cycle and each year has each animal in this order.

This year is monkey year and I was born in monkey!

People in Japan are interested monkey news this year and Charlotte will be more popular like real princess this year.

Come to Takasakiyama Monkey Park to audience her!