I am back to Jakarta from Japan.

I went back to Japan to see my new-born son.

My and My wife’s hometowns are Oita and Nagasaki in Kyusyu Island, which locates south-west part of Japan. Climate in Kyusyu Island is warmer and milder than climate in Tokyo and Hokkaido. Temperature in winter is usually above zero degree. In this column, I will share my tragedy in Japan.

Unfortunately, however, it was very cold and snowed heavily when I visited Japan two weeks ago. According to weather news, it was the heaviest snow for the first time in thirty years. On that day I took the first train from Fukuoka to Nagasaki early morning to see my son born one week ago. Can you imagine how I felt at that time? I would meet my son at the first time. However, that happened….

The train I took was suddenly stopped at the station before my destination. The train should arrive at my destination 10 minutes later. It snowed very heavily like this photo. Never stopped and getting more heavily…It was around 9AM. 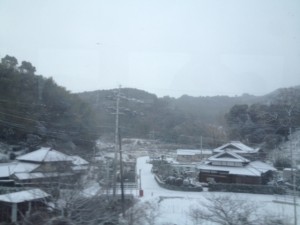 “To all passengers. I am so sorry. Due to heavy snow, this train will keep stopping at this station for some time. Other trains also stopped at near stations. We can not go forward to the destination. Please understand the situation. We will update you if we have new information. Thanks.”

Ohhhh…my boy is waiting! (Actually no! He can’t recognize me yet) That station was very small and no shops or café there. But I could find Seven Eleven near station.

“To all passengers. I am so sorry. Due to heavy snow, this train will keep stopping at this station for some time. Other trains also stopped at near stations. We can not go forward to the destination. Please understand the situation. We will update you if we have new information. Thanks.”

“To all passengers. I am sorry for your inconvenience. We prepared onigiri and drink for your lunch. We are still contacting with other trains and stations for new information. Thanks.”

Until when, I will stop this station! 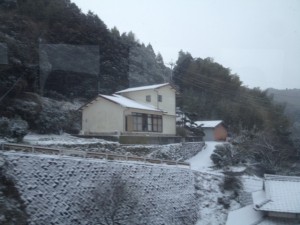 I already read through the book I had and slept a few times while this long stay in the train. I got off train and went to Seven Eleven to buy foods and magazine. It was the first time to get off and walk on the rail to convenience store! I felt this Seven Eleven is the oasis in the desert.

“To all passengers. I am sorry for your inconvenience. Due to heavy snow, we can not go forward to destination. Therefore we decided to go back to the origin station, Fukuoka. We will prepare the space for you to stay in Fukuoka tonight. Thanks.”

Ohhhh…. back to Fukuoka? Why does conductor decide that earlier??

It was around 1 AM on next day when I arrived the place I would sleep. I felt very tired and frustrated since I wasted time at that time. What was worse, I was surprised to see the place I would stay. The place is big rooms for event or seminar. Hundreds of people were lying on floor with blanket. The floor was filled with passengers who can not go to their destinations and only back to here. Some were sleeping with snoring.

I departed Fukuoka early in morning. I think my train was the last to come back to Fukuoka. I could not find my space to sleep there since many passengers who came back to here earlier than me were already sleeping. So I had no choice but to sleep in front of toilet…JR Kyusyu, train operating company, prepares onigiri and drink for dinner. But I did not want to ear something there. I fell asleep.

Next day it still snowed and train kept stopping from morning. I decided to take other route, train from Fukuoka to Kumamoto and ferry to Nagasaki.

At 2 PM on next day I could finally hold my son in my arms. So happy and I forgot I felt tired…

Some foreigners think announcement in Japan is strange because of too many apologies. I agree with this this time. Too many apology but main cause of this tragedy was heavy snow. But to consider passengers and consumers is Japanese culture. Consumers are god in Japan.

Thank you for reading. 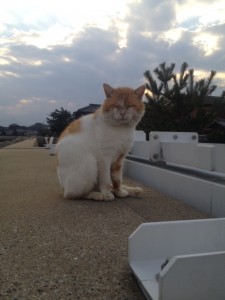