In early December, most influential Buzzwords in 2015 were announced in Japan.

We have Buzzwords contest presented by U-can, publishing company, in Japan every year. Buzzwords reflect current society situation, popular things and event each year. I wanna introduce some of words in this contest for your understanding what is popular in Japan and what happened in Japan in 2015. 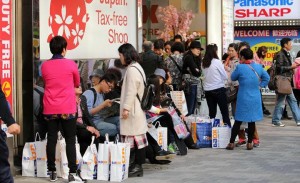 Many foreign tourists visited Japan in 2015. Thanks! There are many tourists in sightseeing spots in Japan and hotels. It was difficult to make hotel reservation in Tokyo and Kyoto when I stayed in Japan. Among foreign tourists, the number of Chinese tourists was the biggest in 2015 compared with other countries.

One of their purposes of travel was shopping in Japan. I could see many Chinese in department stores and pharmacies like Matsumotokiyoshi（マツモトキヨシ）.They say quality of goods in Japan is nice and same items are not available in China. They might give these goods to family and friends or sell these products in China. Many news sources reported their shopping behaviors, big volume shopping at one time. Though their shopping boosted many retail store’s sales, some Japanese complaints because their behavior are rude and some items are sold out.

爆(baku) means “very much” and is used when you want to add meaning of big volume or content. 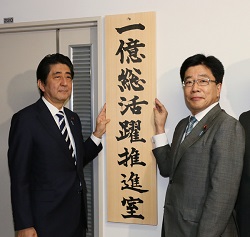 This slogan is announced by Prime Minister, Shinzo Abe, to aim to create more productive country against low birthrate and aging population issues. Japanese PM told he will set new policy to support female workers with kids, disabled people, and senior workers and so on.

We are facing big issue, low birthrate and aging population. Current birthrate is about 1.3 and Japanese average age is about 45 years old. In the near future, workforce will decrease 20% in 2030 compared with now. We should make the maximum use of current workforce more efficiently. Of course, we need some back-up from government and companies.

一億 (ichioku) means one hundred million and sometimes used for “big number”. Our population is about 125 million now. 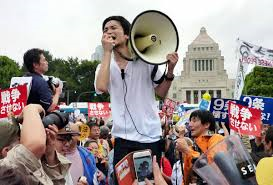 This is political action or group against new amended policy about national security. You may watch their demonstration in front of Japanese Diet on news. Their approaches are very unique. This group consists of university students mainly and uses SNS like LINE to share information. And they appeal their thoughts with their hip-hop songs.

Knowing buzzwords is very interesting because we can know current society situation, popular things and event each year. Some words are newly created by someone. Language is developing to describe reality in the world. I am looking forward what are new buzzwords born in 2016 (or I will make…).