Now is good time for looking back this year and set new goals for next year. 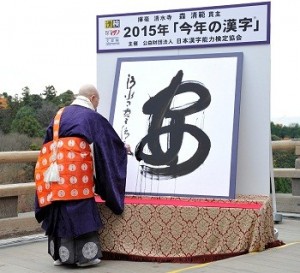 Talking about looking back this year, we have two interesting contests in Japan. One is “Buzzwords contests” , which I already posted about, and the other is “This year’s Kanji contest”. I wanna introduce “This year’s kanji contest” in this post. You might not understand Kanji yet; however, it’s interesting to know selected kanji this year.

“Buzzwords contests” is contests which ten members select popular words or phrases in that year. On the other hand, anyone can vote one “This year’s Kanji contest” which reflects this year’s social situation in every December. But you have to describe the reason why you selected that kanji too. There are 129,647 voters through website and postal mail this year.

I wanna introduce this year’s top 10 ranking here.  This is also useful to your vocabulary building.

How many kanjis do you know in this ranking?

I wanna show the details about each kanji and introduce some reason why people selected.

In this year, new national security（安保） law was approved in the Diet. This was quite big change in terms of right of collective self-defense. Some Japanese were worried about involvement in war by using this right.

Many terrors happened and threatened safety(安全) in the world.

Many tourists from China came to Japan and purchased many goods at one time（爆買い） at department store, pharmacies and super market because of cheaper price and good quality.

Some volcanos in Japan exploded（爆発した）.

There are many bombing（爆弾） terrors all over the world.

This kanji is often used in 戦争（せんそう, sen sou, war）, 戦い（たたかい, tataka i, battle）and so on.

There were many battles（戦い）with ISIS this year.

Many famous celebrity in Japan married（結婚した） in this year.

This kanji is often used in 五輪（ごりん, go rin, the Olympic Game）, 五（ご, go, five）and so on.

Goroumaru（五郎丸） got famous for his performance in World Cup Rugby in South Africa. Goroumaru is family name of one rugby player.

This kanji is often used in ノーベル賞（ノーベルしょう, nobel shou, the Nobel Prize）, 賞金（しょうきん, shou kin, prize）and so on.

This kanji is often used in 偽物（にせもの, nise mono, fake）, 偽装（ぎそう, gi sous, disguise）and so on.

There are many disguise（偽装）cases such as German car maker case and misstatement in financial statements by Toshiba and so on.

We had many politics battles（争い） in Japan.

There were many disputes（紛争） between countries in the world.

This kanji is often used in 変化（へんか, hen ka, change）, 変わる（かわる, ka waru, change）and so on.

There were many changes（変化）in Japanese system such as new national security law, my-number system and Trans-Pacific Partnership and so on.

This kanji is often used in 勝利（しょうり, shou ri, victory）, 勝つ（かつ, ka tsu, win）and so on.

How many kanji in this ranking did you know?

I look forward to this year’s kanji next year.